The benefits of using the JAM Linear Regression Pack include:

This indicator is an enhanced version of the standard TradeStation ‘Linear Reg Line’ indicator. As well as being able to change the Target Bar (to match different platforms), the style of the line can be changed, it can be colored according to direction, and the current value can be displayed in the right hand margin. In RadarScreen it displays the current and ‘Length’ ago value of the linear regression line. 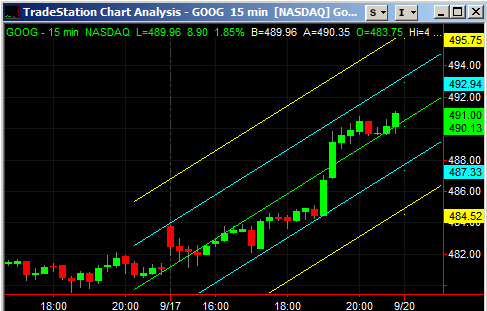 This indicator is similar to the JAM Linear Regression Line indicator, but with added channels. It has all the features of the Line indicator, plus the ability to draw upto three sets of channel lines above and below the central Linear Regression Line. The channels can be calculated with any combination of Standard Deviation, Average True Range, Standard Error, percentage of price, fixed number of ticks, high/low of Line, Raff Channels, or modified Raff Channels.

The JAM Linear Regression Curve indicator is an equivalent of the TradeStation Linear Reg Curve indicator, but with color inputs, and a Target Bar input to enable matching with other platforms.  The calculation is also much more efficient than the TradeStation version, processing around 40% faster.  The JAM Linear Regression Curve with Channels indicator has upto three channels that can be set to calculate the channel based on Standard Deviation, Average True Range, percentage of price, fixed number of ticks or Standard Error. 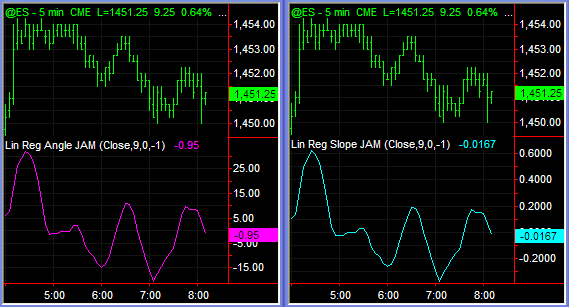 The full set of indicators included in the pack are as follows:

Neither TradeStation Technologies nor any of its affiliates has reviewed, certified, endorsed, approved, disapproved or recommended, and neither does or will review, certify, endorse, approve, disapprove or recommend, any trading software tool that is designed to be compatible with the TradeStation Open Platform.

NOTHING ON THIS WEB SITE IS AN OFFER OR SOLICITATION OF SECURITIES OR INVESTMENT PRODUCTS OR SERVICES IN ANY JURISDICTION WHERE THEIR OFFER OR SALE OR PERFORMANCE IS NOT QUALIFIED OR EXEMPT FROM REGISTRATION.

Futures, stocks, and spot currency trading have large potential rewards, but also large potential risk. You must be aware of the risks and be willing to accept them in order to invest in the futures, stocks, and forex markets. Don't trade with money you can't afford to lose. This website is neither a solicitation nor an offer to Buy/Sell futures, stocks or forex. No representation is being made that any account will or is likely to achieve profits or losses similar to those discussed on this website. Past performance of indicators or methodology are not necessarily indicative of future results.

CFTC RULE 4.41 - HYPOTHETICAL OR SIMULATED PERFORMANCE RESULTS HAVE CERTAIN LIMITATIONS. UNLIKE AN ACTUAL PERFORMANCE RECORD, SIMULATED RESULTS DO NOT REPRESENT ACTUAL TRADING. ALSO, SINCE THE TRADES HAVE NOT BEEN EXECUTED, THE RESULTS MAY HAVE UNDER-OR-OVER COMPENSATED FOR THE IMPACT, IF ANY, OF CERTAIN MARKET FACTORS, SUCH AS LACK OF LIQUIDITY. NO REPRESENTATION IS BEING MADE THAT ANY ACCOUNT WILL OR IS LIKELY TO ACHIEVE PROFIT OR LOSSES SIMILAR TO THOSE SHOWN.